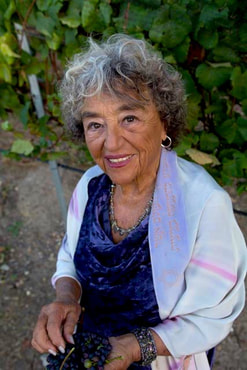 Rabbi Leah Novick in the vineyards of Carmel.
Spirit of the Earth has been presenting lectures and workshops on the Central coast open to people of all  backgrounds. Classes were held at the Meditation chapel of the Community Church, some at the center for Spiritual Awakening and others at Congregation Beth Israel.

Our focus has been to present the wisdom of Jewish Mysticism and spiritual customs in a manner that enhances interfaith understanding and tolerance. Rabbi Leah has also spoken at many church programs in the area and participated in a variety of ecumenical events.

With our emphasis on the Feminine within Jewish tradition we have also served to strengthen women’s groups in this area and beyond. Part of our mission has been to enhance equal participation in spiritual settings. To that end, we were the convening vehicle for “Forty Years on the Bimah” a conference of  northern California’s  women rabbis, held at Mt. Madonna center in the Santa Cruz mountains.

The gathering was the first time that the women rabbis of across the streams of affiliation, (Reform, Reconstruction, Renewal, Conservative) came together to share their present status. It was also an opportunity for them to become acquainted with the work of the Hindu center. (There are over 80 women in the rabbinate in the Bay Area about 40%  attended)

Over this decade we have also been involved in the “Jewish Renewal Movement” (Aleph) nationally and network with sister groups, especially those in Santa Cruz and Berkeley.
Rabbi Leah teaches at national conferences sponsored by the Aleph Alliance every two years. She has also presented to international ecumenical groups including the Parliament of World Religions (Salt Lake City Utah 2015)

We are currently working on two projects. One entitled “The Tallit Project” is attached. The other. which is a proposal for a Sacred Meditation Garden, based on the Kabbalistic system, is waiting for an appropriate sponsor .

Spirit of the Earth is a Charitable Trust Federal  I.D  # 77-0427003 and Organization # 1789501 in the State of California, (filed  January 17th,  2006 by attorney Richard Klein, Santa Cruz, Ca. A certificate from the Secretary of State of California, dated March 3, 2006 indicated receipt and authenticity of records.)

Spirit of the Earth is the convening group for  spiritual teaching and ecumenical outreach work in the Monterey County Ca. area led by Rabbi Leah Novick, of Carmel who serves as President .The other officers are Neil Richman,M.D. Seaside, treasurer, and Sarita Chavez Silverman of Pacific Grove, who serves as secretary. There is no paid staff beyond occasional student assistants.