SHEKHINAH AND THE MOON 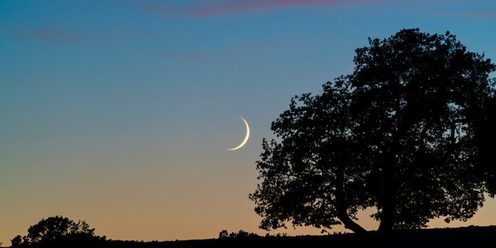 SHEKHINAH AND THE MOON
By Rabbi Leah Novick

Judaism like most ancient cultures allegorized the moon as female, the sun as male.In the commentaries on the first chapter of Genesis, the moon and sun start off as equals at the beginning of time, but the moon is diminished when she complains to God about having to share equal billing with the sun. (A similar myth exists inHawaiian culture) However she is promised a return to full size in the Messianic era implying, the eventual equality of the human male and female in the messianic era.

She is then placated with the prospect of God requiring New Moon sacrifices and prayers when she emerges. The moon, like the people of Israel, goes into exile but always comes back. Likewise, the Shekhinah, once the proud mistress of the Holy Temple in Jerusalem becomes exiled and humiliated by the conquering nations. But, there is always the prospect of her being redeemed and her sovereignty restored by the righteous acts of her people. (Like the sleeping princess in fairy tales, her release depends on the hero who can break the spell of the demonic forces who hold her
captive.)

The monthly re-emergence of the crescent moon was celebrated by Jewish women for at least the last two thousand years. They were, according to Jewish legends, “given” Rosh Chodesh as a specifically women’s holiday because they refused at Sinai to contribute their jewelry to the construction of the Golden Calf. We know that moon celebrations had already existed among the indigenous Canaanite people and the neighboring cultures. In effect Jewish tradition probably provided official sanction and an additional spiritual dimension to an already known practice.

Perhaps Judaism in honoring women with the gift of Rosh Chodesh was acknowledging the congruence of the moon’s phases with the female menstrual cycle, which also features renewal and potential for new birth (crescent moon) full glory of pregnancy (full moon) and the gradual closing of the cycle represented by menopause (waning moon). Classically, these would be the Maiden, the Mother and the Wise-Woman in the life of the biological woman. Moon goddesses abound in Middle eastern history and the early Israelites were especially aware of Asherah, and Astarte who were part of Canaanite and Ugaritic culture. According to the Torah all the matriarchs grew up in Goddess worshiping areas and probably had knowledge of the rituals associated with those deities since their own immediate families were involved in those practices. These Goddesses were connected with predominantly agricultural societies that placed great emphasis on prayer and worship of the female deities as part of the periodic replenishment of the earth. The moon is seen as nurturer and was probably experienced by ancient peoples as having an effect on the growth of the crops.

At Hazor in northern Israel (an ancient archaeological site excavated by Yigal Yadin and others) there is a statue considered to be the male moon god named Sinn, in the ancient Babylonian pantheon, who is portrayed as traveling through space in a crescent shaped boat with a full moon over his head. Some ethnographers think that Mt. Sinai was named for him and that we were receiving the Torah on the moon mountain! He dates from the old Sumerian culture of about 12,000 BCE. and is probably part of the “host of heaven” which Jews are instructed not to worship. That practice is embodied in the small stone carvings, on the stellae are excavated at Hazor dating from the 17th century B.C.E. where two human hands are upraised in a mudra of blessing the crescent and the full moon. While Jewish tradition forbids such worship of sun, moon and stars, Jewish rituals for blessing the moon recognize its importance to the human psyche. “Kiddush Levanah”- the prayers for sanctifying the New Moon- also contain elements we might easily see as pagan, (jumping towards the moon and invoking prayers for protection from evil), but with added religious elements that make the ritual part of established Jewish practice. The sages caution us to honor the heavenly bodies, and nature, not as gods, but as part of Gods creation. In this respect the attitude towards the moon directly parallels presentation of the Shekinah concept insofar as the proverbs present the Divine Feminine, Hochmah, as one of Gods first creations and Divine Consort in the development of the various species.

During the era of the central Jewish temple, New Moon celebration included specified sacrifices accompanied by priestly blessings and levitical music. A unique contribution were the special ceremonies for cleansing the people of their mistakes. Based on the notion of renewing self and community each month (like a woman’s menses) the priest would cast blood in various directions. These took place at the time when earth, moon and sun were in alignment; and were carried out by the high priest or prince to ensure the flow of renewed energy into the community. Shekhinah’s protection for the people was invoked through the temple practice for the all Israelites, but no doubt most dramatically for those in the city able to attend. The mood of introspection and renewal was reinforced by the custom of visiting a prophet, which was also taking place in more provincial settings at local shrines. The moon, like the Shekhinah was associated with prophecy and it was believed that on Rosh Chodesh we had a greater capacity for seeing into the future.

Rosh Chodesh was also the time for gathering with family and friends, likewise reflecting the belief in Shekhinah as the source of connectedness, as a spiritual glue (devek) that holds the universe together if we adhere to her (devekuth-- attachment, devotion to God) This practice of Rosh Chodesh visiting for a festive meal (dating at least to King David, as recorded in the books of Samuel and Kings) was carried forward in history in the customs of Middle Eastern Jews who often gathered with the extended family on Rosh Chodesh to offer prayers and intentions for the new month. These gatherings, like Shabbat were celebrated with ritual candle lighting and festive food to honor Shekhinah’s presence. The underlying Jewish assumption is that Rosh Chodesh like Shabbat and Holidays offers a unique opening to the Shekhinah and that she is in effect more present at these times and serving as a divine facilitator for our prayers and meditations to ascend.

While Middle Eastern home rituals for the New Moon involved the whole family, there were also separate women's gathering documented in both Eastern and Western cultures. Female observance - in the home and among groups of women - guaranteed the perpetuation of moon awareness as sacred time. Women's informal ceremonies probably stayed closer to the old nature celebrations in which the divine mother was honored through music, dance, food and drink in joyous communal worship that probably included bonfires in ancient times. Women’ s candle lighting may have become the substitute for the fire lighting ritual, just as women baking challah took the place of the temple show bread. In this vein, perhaps “taharat ha mishpacha” or “ nidah”; womens immersion in mikveh is the substitute for the cleansing rituals on behalf of the people, carried out by the high priest. (In women's prayers dating from the seventeenth and eighteenth century  (the “techines”) there are references that women make asking God to regard their home ritual baking and lighting as works of the same import as the High Priest......cite prayer) both tracks- the female informal and the more male structured continued throughout the Jewish diaspora with great rabbis offering answers to legalistic questions regarding appropriate New Moon observance and prayer.

Lurianic philosophy - developed by the 16th and 17th century Kabbalists of Northern Israel amplified the understanding that the time right before Rosh
Chodesh is an optimal time for forgiveness and the resolution of conflicts. From this came the 17th century practice of “Yom Kippur Katan” among the followers of Rabbi Isaac Luria in which community members (presumably male and female) would publicly air the problems within their circle and ask for forgiveness from each other. This belief is echoed in African and Middle Eastern Jewish communities in which girls were encouraged to settle differences the day before new moon. Hence, we release the old patterns in order to be renewed by the moon. One would thus prepare for the appearance of the fresh crescent by moving into the quality of forgiveness, which is associated with God’s quality of patience.“erech apaim”) The
Shekhinah is portrayed, even in pre-Talmudic writings (Pesichta d Rav Kahana) as always trying to get us to shape up morally, Despite our backsliding, she has infinite patience like a long-suffering Mother and calls out to us repeatedly to mend our wayward ways before it is too late. The Talmud teaches that the Shekhinah cannot abide in an atmosphere of insensitivity or sin and that she is particularly averse to violence and incest. The moon time thus became an opportunity for monthly realignment to the divine so that we can restore our moral commitments to our fellow
creatures. (Perhaps it is time for contemporary Judaism at large to take on this process.)

Chasidic practice which drew on this earlier period, tended to emphasize Rosh Chodesh as a time for prayer and celebration. Modern orthodox Judaism in Israel great prayer gatherings on Rosh Chodesh at the Western Wall, especially during time of national crisis. “Siged” among the Ethipian Jews on New Moon of Kislev, likewise focused on asking divine intervention with major problems facing the entire community.

For a long time only observant Jews focused on announcing New Moon and some form of specialized prayer (in daily and Shabbat Siddur ‘ Yaaleh v yavo.”)

The dramatic emergence of women’s New Moon groups, rituals and book in the 1970’s and 80’s were a testament to the enduring attraction that the moon continues to exercise on our inner life. In an atmosphere of feminist activism, Jewish women became more outspoken and ready to reclaim the customs of their foremothers in a style that fit with a modern consciousness. New prayers poems and songs emerged from both lay people and the newly ordained women cantors and rabbis. Integrating processes developed in the human potential movement, with feminist writings and Judaic scholarship a whole new wave of women's ritual and ceremony was born. Many of those groups were synagogue affiliated; others free standing most all women, some mixed gender.